A wee swarm collection from York

A lovely swarm that I collected last night after a phone call from someone in their allotment. Bit awkward when they are so high up in a flimsy tree as you can't get the box up there. Pictures are a bit crappy as they are from a mapple.
They were very small bees. Smaller than all in my apiary which may mean they are feral? The reason I say that or think that is the foundation bee keepers use has slightly larger cells which makes the bees slightly bigger. Foundation is a sheet of wax with the comb impression on it that we put into a frame  from which the bees draw comb. I have left a few frames now that are without foundation but the bees are still making larger cells so I still don't know if there is any truth in this. I have read it but you can't always believe what you read especially in bee keeping! 20 ways to do the same task. 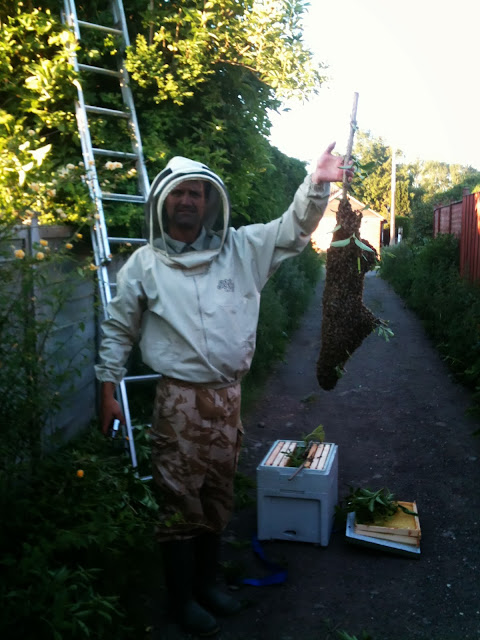 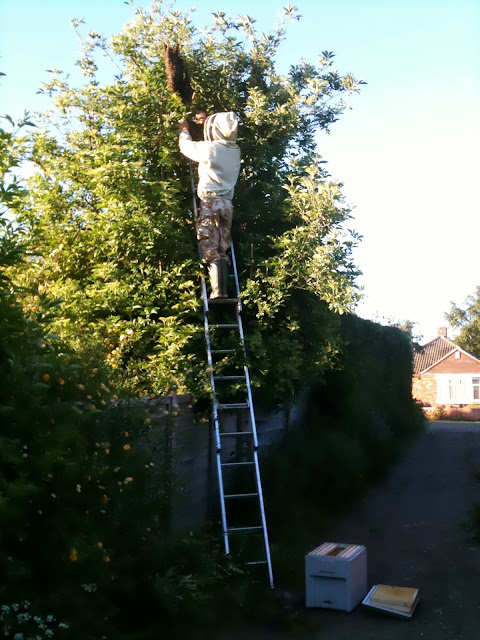 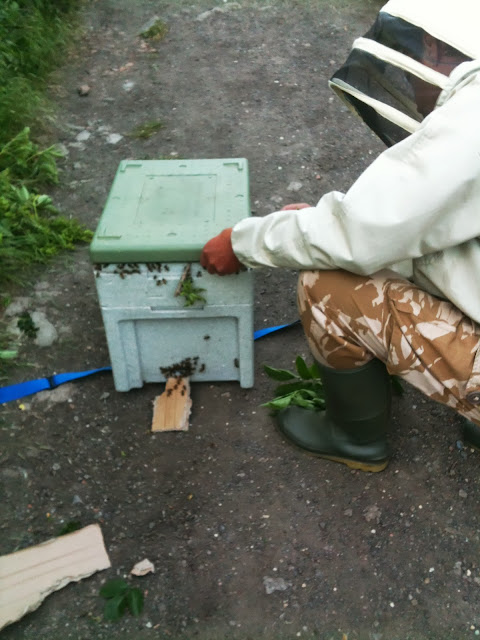 A quintessential English summer day in the bee garden

What a lovely day again! Summer has arrived with a grateful bang indeed and I for one shall not be complaining one iota :-)

LaLa the tiger girl was being cheeky whilst enjoying the radiant warmth of the day amongst the many wild flowers the meadow does offer even if they are a few weeks late to bloom.

Buttercup the very handsome boy stands on lookout for the dumb dogs that occasionally enter the grounds in search of who knows what!

The veg garden is starting to give up some goodies which is great for a fresh healthy dinner.  Mixed leaves, chives, corriander, spinach, beetroot & wild garlic leaves, hot spicy radish and spicy rocket my favorite:-) A couple of Brian from down the street chicken's eggs followed by a rhubarb (home grown) crumble by Caroline and that is one meal to beat :-) 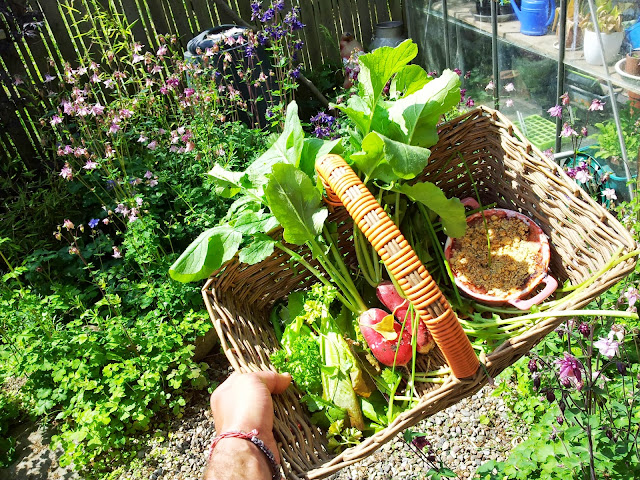 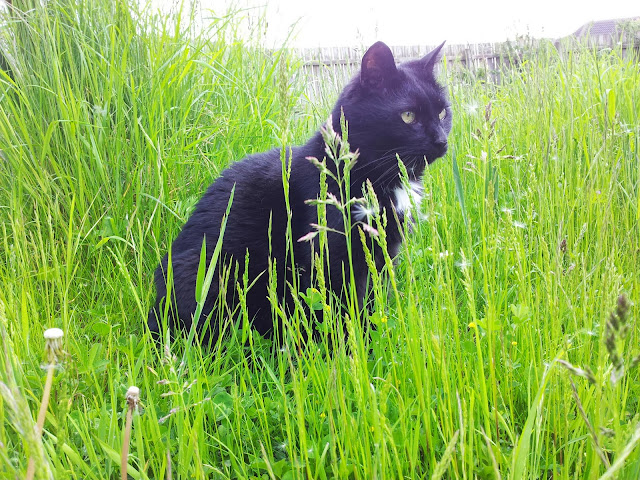 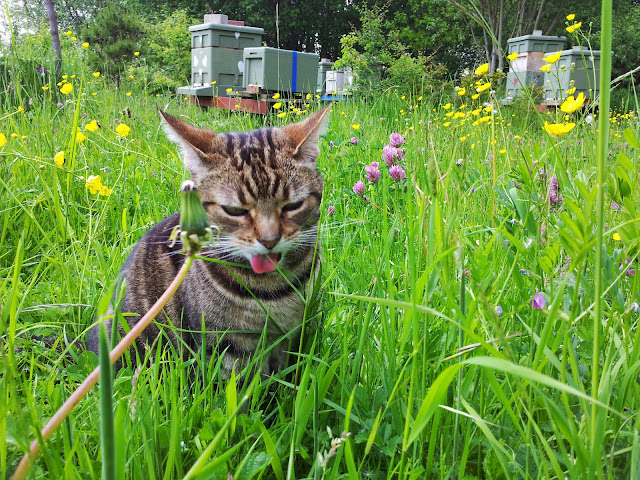 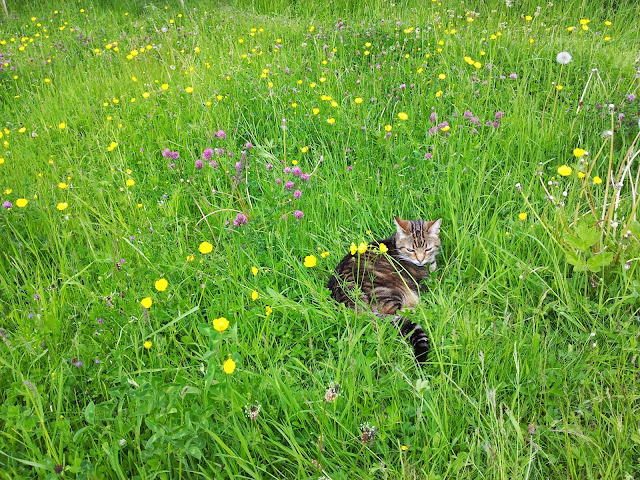 A pleasant morning in the bee garden ahead with bees n wild flowers for company.
Looking like the first honey harvest coming up in the next couple of weeks which is 4 weeks behind last years! Its been a very tough 12 months for the bees, and me but we are all through it and enjoying the warmth of an English summer........while we can:-) 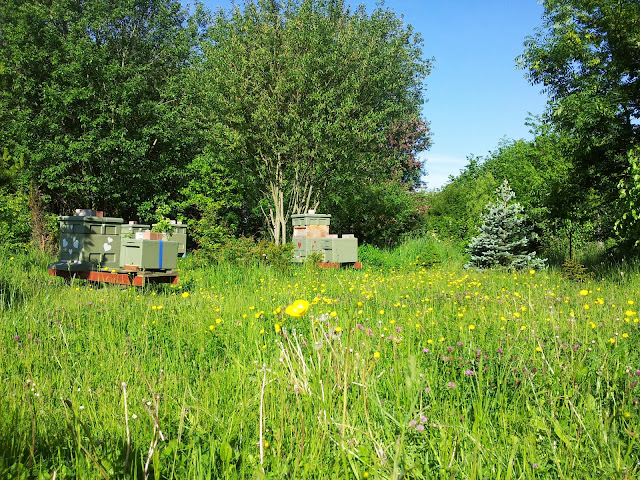 Very handsome chap with attitude. Sitting on the road near Hodge's hobbies warming up in the morning from the tarmac. When I picked him up I thought he would bite me! Put him clear of the road well away from the red necks. 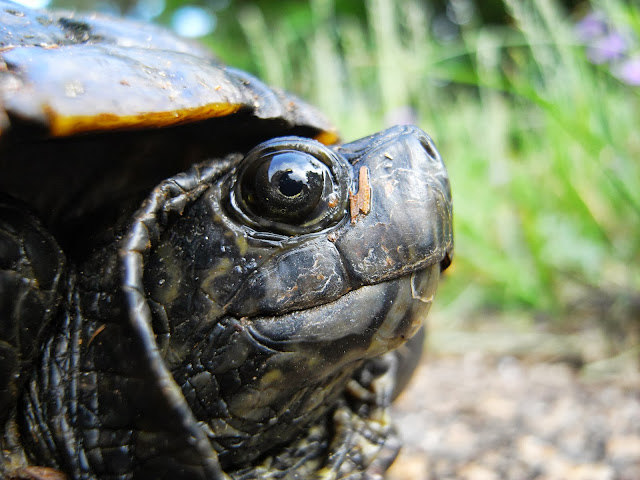 Georgia on my mind

Had what should have been a mighty fine trip to Georgia for a great comp run by Jamie Shelden and sponsored by Steve Kroop of Flytec USA but unfortunately I became a little under the weather out of the blue. It didn't of course quell the enthusiasm but the brain did become all fuzzywuzzy due to the drugs. Its not an excuse to my crap score just a major factor!  Thanks to Heather dearly. If you read this I am and will be forever thankful. I wouldn't have done what you did xx

The Souther Field Airport in Americus is an amazing place to fly out of behind a Dragon Fly which is where the comp was held. Very soft big ol smooth thermals most days and we didn't get the good stuff! You can have a three hour flight and not even get an ache its so sweet, either that or the Wills Wing T2c I fly is as equally sweet or maybe a combination of the two? If you have never been to a Flytec comp I urge you to do so as the organisation is second to non and very laid back especially after a couple of margaritas;-) It can be a little expensive as usually it involves getting a long airline flight for European pilots and the odd Ozzie or two, may have been 3 even this year! The best place on the planet, in my humble opinion, still has to be Quest Air for the flying and the horizontal laid backyness:-) Have had two trips there this year and would go every other week if only I could. Sigh...............

I would write a wee report on the comp and what went on but I only remember the first 3 days and they are a little fuzzwuzz, so I won't even try. Hardly took any pictures neither which is unusual for me and a regret!

To try and cut costs I rented an SUV to live in for 2.5 weeks and I have to say it was very pleasant indeed. It gave me freedom as in America no one hardly walks! Certainly in Georgia where there seems to be  so many obese people in one place! Propper obese living on corn syrup and deep fried everything! So my favourite place to sleep was at the end of the model, bowling green runway at Hodges hobbies where even the shower/toilet rooms were air conditioned and at $10 a night was a bargain! Would pop into town for breakfast at an amazing coffee shop where they actually roasted the coffee bean in bulk out the back with the beautiful aromas hitting you as you got near. All organic with lovely yogurt and fruit with great WiFi and truly lovely Spanish staff. A place that was like someone's front room in the back with big ol settees and armchairs.

Virgin Atlantic! My god they have been superb on both trips this year. Not hardly blinking when I turn up with a short packed hang glider, long packed harness, clothes bag and a rucksack mounted on a pair of wheels made from an old skate board, down tubes and tent poles! They even ushered me to the first class lane to avoid the lines of people all queuing to check in! I really can not praise them enough! You're beautiful Virgin Atlantic.

So, to see if the blogging becomes easier......... Looks like the pictures are fixed on the app which is a shame and means they all end up at the end of the text! 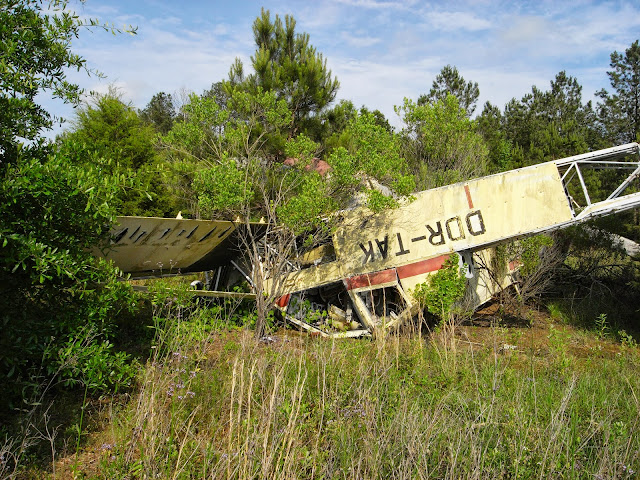 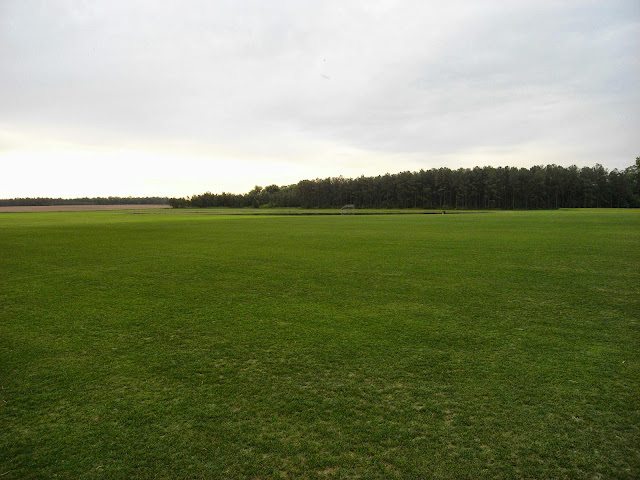 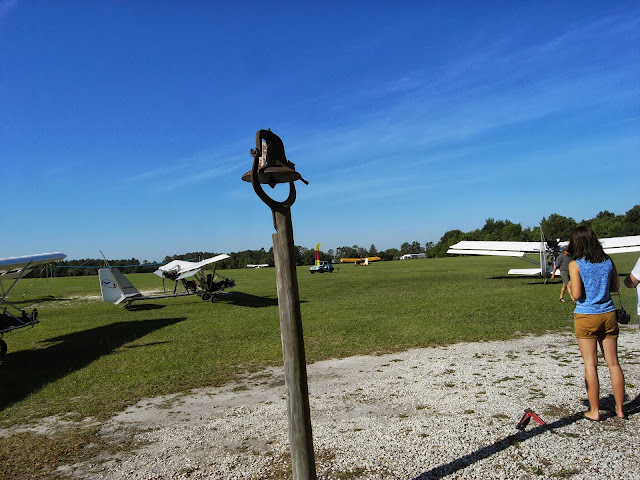 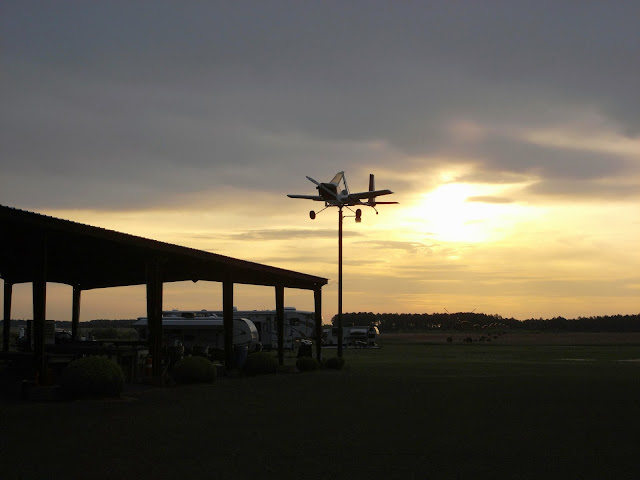 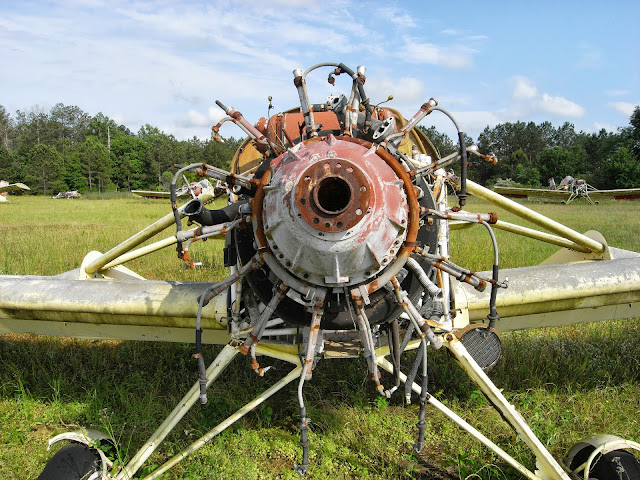 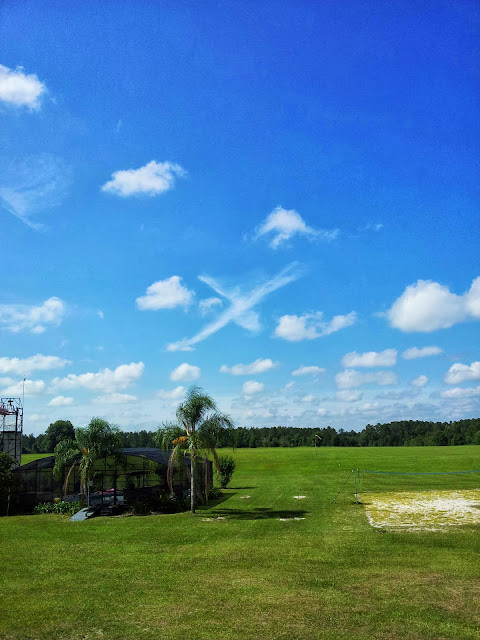 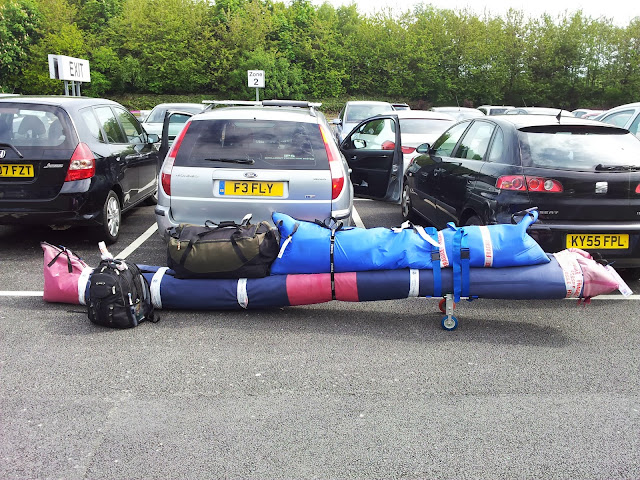 Poor chap. Didn't realise what was wrong with him until i picked him up to move him off the road:-( 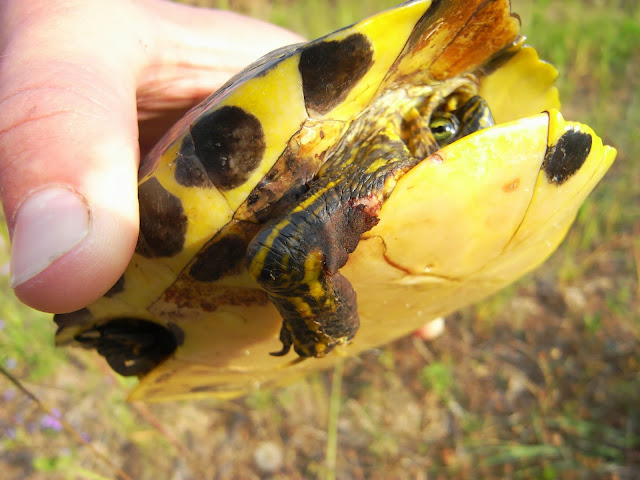 I arrived at Saint-André-les-Alpes, France on Sunday evening

View Larger Map
– had a bit of a run-in with the bloke at the campsite on Monday when I turned up to pitch base. Unfortunately he wanted all PG’s and HG’s to camp together (in a not so great part of the campsite); I thought I’d understood where he wanted me but he wanted me to move – this whole experience left a bad taste (I wanted to be welcome there) so I de-camped to the smaller and I have to say MUCH nicer campsite just out of town. I know it’s not as convenient for briefings but I like it here - Doris arrives on Saturday and will be happy, I am sure.
So we are now camping at Camping de L'Issole not Camping Les Iscles 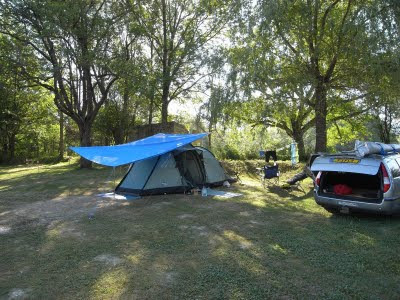 We had a lovely day flying yesterday. Base upto 8000' and nice climbs be it a little rough at times but that's St A;-) Very light wind which makes a change. 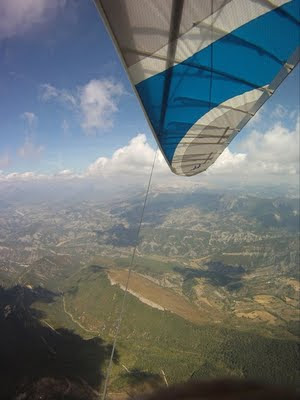 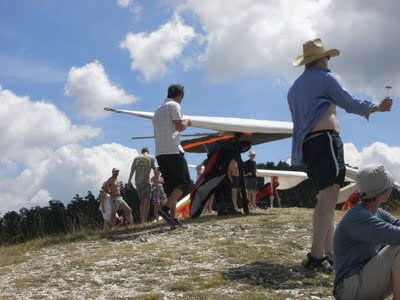 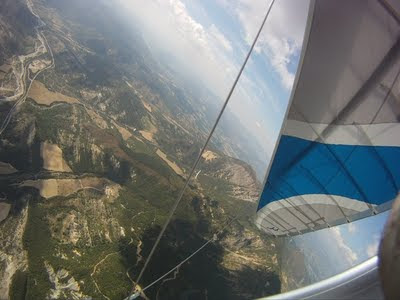 THIS COULD BE THE LAST BLOG - There is no Internet at the campsite so this could be the last blog for the duration of the comp. Hopefully the Comp Website will be up to date with news and results so you can follow HERE
Other bloggers could be:
Jochen
Jamie
Phippsy 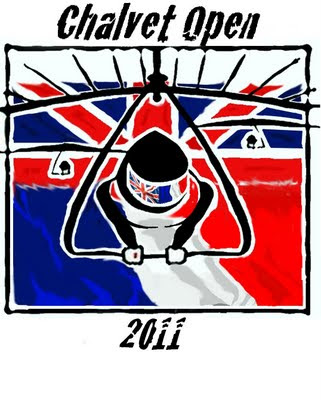 Book your place now for the Chalvet Open : 21-27 August 2011, St Andre les Alpes - see you there! Just checked the PILOT LIST and it's looking like it's going to be one of the biggest hang gliding comps this year with around 90 entries..... Phil our scorer tells me he's booked his week in rehab!

The comp includes the French and British Nationals. As well as Class 1 there will also be a comp for Club [Sport] Class and Rigid Class 5. Talk at The Worlds was that the Rigid Pilots are hoping to do 200+km flights (weather allowing) but aren't we all.

We apparently have the whole launch area 'booked' and the whole mountain to ourselves (ie no PG) during the taskable time.

The waypoints list is now available to download from HERE
Posted by Rich Lovelace at Wednesday, August 10, 2011 No comments:

Today was also cancelled which means The Worlds was won with only 2 tasks. 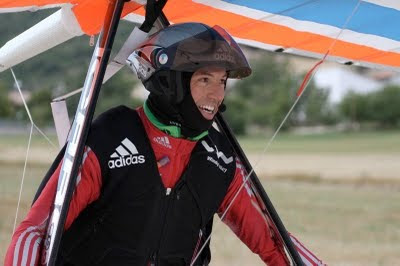 A few Thank You's
- to the organisers and helpers of the competition; if only better weather could have been pre-booked it would have been perfect.
- to Team GB Manager, Pete and also to Trudy for the retrieve :-)
- to Team GB Sponsor and also my personal sponsors Aeratech, Doris and her Dad, John Drury 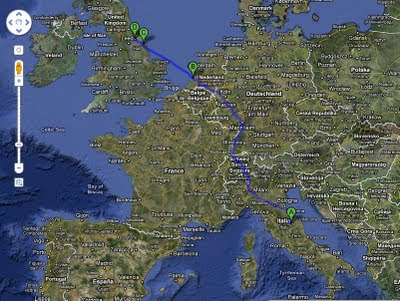 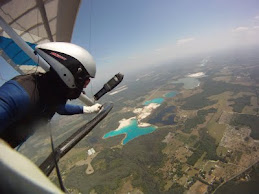 Thank you to 'Doris' and also thanks to the BHPA Competitions 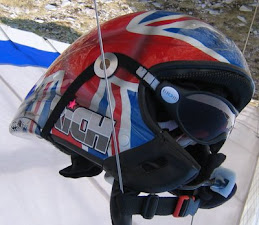 For some unknown reason the bloke that painted my helmet put a pink star next to my name.......still he did a pretty good job of it - check him out by clicking the pic! 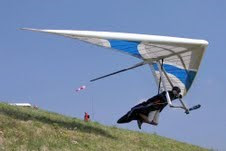